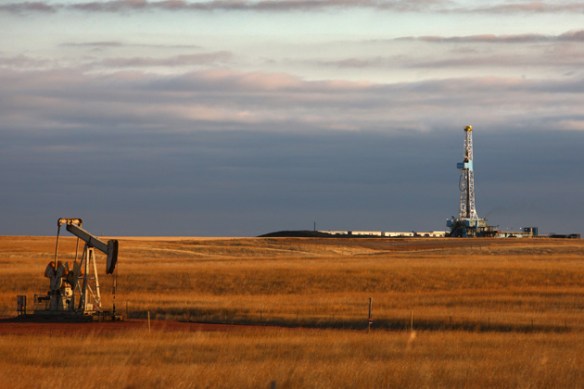 An oil rig in the Bakken. This represents a massive shift of primary energy resource production power in the world. picture source

What do the price of oil, the president's state of the union address, and middle eastern stability have in common? In the address, the President talked about fighting climate change, but the US is going full-tilt towards more drilling. While this sounds like hypocrisy, it actually puts the US and the world in a better position to deal with climate change. Sounds crazy? Keep reading. Here's a hint though: What would happen if the price of oil dropped to $40 overnight? Much of the Middle East power structure would collapse.

The Science!  (skip this if you only care about what oil prices do for the Middle East)

Because this is a science blog, I am writing science stuffs here.

Hokay, the background. The world consumes around 90 million barrels of oil a day. How much of this does the US produce? Check out this graph: 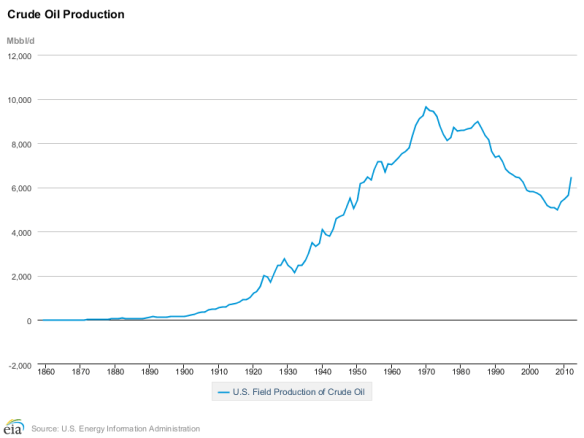 I want to point out three things. First, in the 70s and 80s the US was one of the world's most prolific oil producing countries. A lot of this came from huge Texas fields, like Eagle Ford. And then the gigantic basins like Eagle Ford ran out of easily accessible oil, and US oil production collapsed. Now look at the ramp rate of production in the most recent years. The rate of increase in production is unprecedented. It's going up fast.

Next, lets focus on Texas and North Dakota: 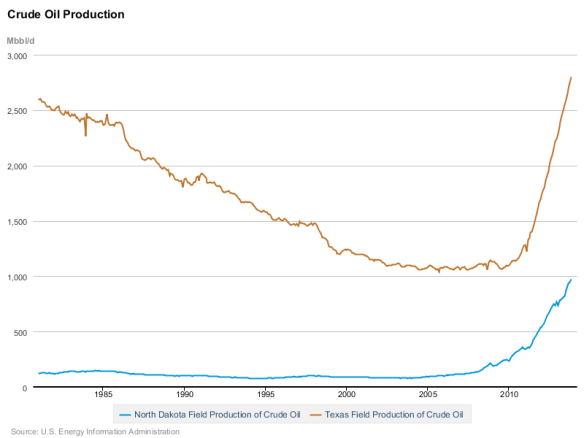 Let's put this in perspective. Iran produces 4 million barrels a day. North Dakota and Texas alone produce nearly this much. Look at those growth rates. Are they showing any signs of slowing down? No. In other words, the US is rapidly becoming one of the world's most prolific producers of oil.

How'd this even happen? Hydrofracking and horizontal drilling. Earlier I said that Eagle Ford and such were played out. In reality, all the easy oil in it was pulled out. The remaining oil is like the Bakken: tight oil. Let me emphasize this:

Every single major play of the 70s and 80s is about to become a new Bakken.

That means going back to the days when the US was the largest oil producer in the world. That means Russia is also going to be able to ramp up production, once they figure out how to hydrofrack.

So the price of oil is going to drop in the future.

What This Means for Politics and the Middle East;

Expansion of drilling in the US and Russia will have two major effects. The first is that we will no longer rely on oil from the Middle East to supply the world markets. In this case, the world will care less about stability in the middle east. To the point where the world would just let the Middle East burn, just like we let happen in Africa today (except for Israel, I would guess)

This would mean less military spending, which would in turn mean more domestic investment (or lower taxes, but our ailing infrastructure and gutted R&D budget really could stand to be brought back up to where it was when the US rose to become the world's only superpower).

The second implication of this glut of oil is much more far-reaching. It means is lower oil prices worldwide. If oil drops below $75 a barrel, even Saudi Arabia struggles. It'll be hard for the Middle East to make trouble when they cannot afford to. Now let's say hypothetically that Iran funds terrorist groups (I haven't researched this and don't know whether it is true, so it's a hypothetical). If the price of oil drops to the point where they can no longer profitably produce, then suddenly our hypothetical country cannot fund terrorism. And we save moneys from no longer needing as much anti-terrorism programming.

In other words, we save money because we won't be sending military to the middle east, and because terrorism will potentially be more poorly funded.  Let's sum up: produce more oil, the price of oil drops, countries and companies make less money from oil (mostly countries, companies have a way of maximizing profits pretty well), since countries have less money, they can't push their state agendas as much.

Wrapping This UpSo, pretty much, drill more in the US (where we can regulate emissions), save a ton of American (and European) money by no longer having to make sure there is peace around oil resources, use that money to fix all the problems we've created with the environment. In other words, more drilling is a potential long-term solution because it will eventually free up more funds in the federal budget.

It's my guess that the president can't say, "We need to drill in the US to make it so we don't have to spend money stabilizing the Middle East. Once that is no longer a problem, we can use the extra money to address climate change."

Some criticisms: If the decrease in the price of oil results in more oil consumption, this would be bad for the environment. We need to continuously improve efficiency of vehicles and industry, and decrease our demand for oil and fossil fuels. Any money saved from military intervention happening less should be driven towards this goal.

That's all for now! Thanks for reading.

One thought on “The President's State of the Union Address. Geopolitics of Oil: Expanded US (and Russian) Oil Drilling and the Middle East's Bane.”