Dams. They provide clean electricity. Sometimes they cause earthquakes that kills thousands of people.

As I mentioned before, hydro is a tapped resource in all places except Asia, Africa, and South America. In other words, it works great in developing countries. It is not an option for developed countries.

Despite that I provide references where I can, this post is pretty unprofessional. Also, since I didn't post last week, this will be a mid-week post. It is as close as I will get to a blog rather than a collection of science-based articles.

Three gorges dam represents the domination of Man over Environment like nothing else on the planet.

How do earthquakes happen in general? Stress builds up in the Earth, usually from shifting tectonic plates. Loading a massive amount of water in an area increases the stress by huge amounts. Dams load billions of tons of water into an area. Dams are not the only way to do load the environment to prime it for an earthquake. Downtowns of cities with skyscrapers also do a pretty good job of it. But dams are way better at it.

Pros and Cons of a hydro plant

Let's look at more information on Three Gorges. I've recommended y'all read When A Billion Chinese People Jump. In that book, we find that the past several presidents of China have been hydrological engineers. The most recent one didn't show up at the opening of Three Gorges because, because in some ways, it is very controversial. It has very strong benefits and issues. Despite negative effects, it produces 22.5GW of electricity. In other words, it replaces 22 very large coal fired power plants. And in China, that means 50 years of 22 unfiltered powerplants not belching harmful pollutants into the atmosphere. In case you haven't heard, China in general and Beijing have some of the worst air pollution in the world. Before you start judging, remember all those jobs that are being outsourced to places like China? This is the result of that. We are exporting our trash and our pollution to poor countries, where environmental regulations are more lax. Getting back to the point, those 22 coal fired power plants that are being replaced would probably have caused more long-term deaths than the earthquake. Moreover, China is a very dry country. Like most dry countries, it is prone to flooding without controls. Containing the river behind the three gorges prevents the downstream from ever being flooded again. So they saves the homes and such of millions of people, but had to move millions behind the dam, and it also flooded historic areas. How's that for controversial? Serious positive and negative implications. No dam embodies the pros and cons of building a dam more than Three Gorges.

Other uses of dams

It turns out that producing electricity is only a small part of what dams do. Many are used for irrigation, for flood control, for reservoirs, and to protect the environment. We are mostly an energy blog, so we don't give a damn about all that stuff. Except one major point: electricity is less than 10% of the economic benefit from dams. A huge amount is in flood control, irrigation, and recreation.

FEMA says these are the benefits of dams. Notice that hydroelectric is tiny.

When you think of a huge American dam, you think Hoover. This is silly. It is a 2.5GW dam. It is 10% the size of Three Gorges. It is like comparing Bangor ME, to Boston, MA. One is just tiny. Why do people care about Hoover? I dunno. Maybe after spending too much time in Vegas they decide they want to see something natural? Hoover dam is tiny. It only replaces 2 or so coal plants. Hoover Dam, you are not worth wasting words on.

Grand Cooulee Dam is one of the largest dams in the world. Notice the size of the houses for scale.

You know which dam is an American dam? Coulee Dam. This dam produces 7GW. Fully 3x of Hoover, and near 1/3 of Three Gorges. It is also in Washington state, which, compared to Nevada, is better in every way except for gambling and prostitution. Which shouldn't be family activities. Why don't more people visit Grand Coulee instead of Hoover? This is not a rhetorical question. Someone please tell me.

Grand Coulee has this other sweet feature I already discussed. They have pumped hydro storage. In other words, they pump from the area behind the dam to another dam that is far higher up. This is a great way to make a giant battery. It recovers about 60% of the electricity that is put into it.

Interesting note: While scouting around the interwebs looking for information on the pumped hydro storage at Grand Coulee (it is really difficult to find), I stumbled across a blog that already has written posts that are way more in-depth maths about many of the things that I write about. If you are one of my sciencier readers, you might want to check his page out. I will poke around there some and give you more info on it later.

Dams produce clean power. They are environmentally friendly! Or not.

We have discussed how dams get backed up and leave heavy metals in the sediment, and more or less create environmental issues. And how they block fish from swimming upstream. I wanted to touch on one thing again. In China, many places that built clean hydro plants attracted industry, cause industry loves inexpensive power. And hydro power is amongst the cheapest. So the skies and waters became quickly polluted with industrial wastes. Like, red polluted. 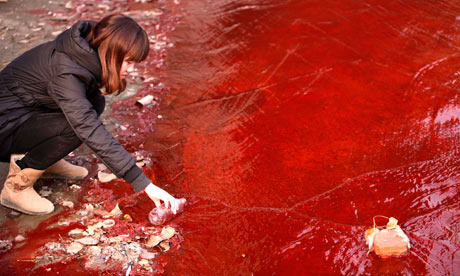 Image from the link above. It looks like the Earth is bleeding. I don't think this is healthy. And all my Boston readers are afraid of the Charles.

Outsourcing manufacturing seems even a bit crappier than it used to, doesn't it? Sure, we lose jobs, but they lose lives and the environment.

Alright, that's about it for my quite unprofessional rant. Thanks for reading.

2 thoughts on “Some dams”